Looking Back – The Codpiece

It can be funny sometimes to think how styles and trends and the epitome of manliness have changed over the years. When this writer was a little girl, manly men wore white Y-front undies and never went without a white chesty Bonds singlet (at least, that’s what my father wore … and does to this day. Some of us don’t move with the times so easily, it seems).

Five hundred years ago, the epitome of the quintessential manly man was expressed in the codpiece. Worn almost exclusively through the 1500’s and all but gone by the 1600’s, this was one unforgettable garment which was basically underwear worn as outerwear. Men of this era wore hose to cover their legs; these did not cover the genitalia as well.  The stylish length for jackets and doublets rose over time, and men found themselves embarrassingly exposed in their nether regions when they sat or mounted their horses. To cover their genitals, they wore a simple piece of linen which was tied down or buttoned to the hose. It was named the codpiece, from the Middle English word “cod” which meant “scrotum”. The codpiece also offered better freedom of movement. It wasn’t long before codpieces became a way for men to enhance rather than hide the area. They were padded, embellished, and made longer and bigger – to the point of being ridiculous. Some were crafted from metal. The bigger a man’s “ego”, the bigger he wore his codpiece. There may have been other reasons for this than to simply emphasise and exaggerate a man’s sexual wares. Anthropologists believe that the prevalence of venereal diseases dictated the use of codpieces to allow them contain dressings and medications for the area, without being obvious to others. 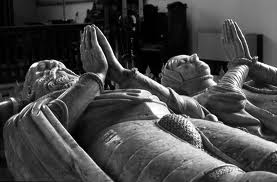 King Henry VIII of England is perhaps the most famous wearer of the codpiece; a look at his surviving armour shows just how big he wore this garment. Considering that it is well known that he suffered from advanced and severe syphilis, and in light of the medication theory, one can surmise that perhaps it wasn’t all about his ego. Not entirely, anyway.