Singlets: To Wear or Not To Wear?

When I was a child, in the late 1970s and into the 1980s, it went without saying that I wore a singlet – all the time. I was not considered by my mother (or grandmothers, for that matter), to be fully dressed unless I had my white cotton Bonds girl’s undershirt under whatever I was wearing. If said singlet was untucked, I was told I would catch “cold in the kidneys” or, even worse, pneumonia. When I got older and graduated to a bra (and made the choice that wearing a singlet as well was ridiculous), my grandmothers were almost scandalised.

It goes without saying that babies wear singlets, for the extra warmth and comfort they offer, but what about everyone else?

Small kids can also benefit from the extra warmth a singlet offers. There is also the aspect of modesty, where thin fabric on T-shirts or shirts offers just a little too much information (particularly true in prepubescent girls).  But what about older people?

We all know grandpa religiously wears his white cotton singlet, probably tucked into his white Y-fronts. Grandma most likely wears a singlet with her bra, “step ins”, petticoat and pantyhose on a daily basis as well (well, my old granny does, anyway). Do younger generations still wear them? 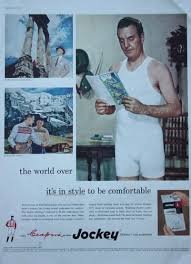 The original purpose of the singlet (as with other undergarments) was not for warmth, insulation, or even comfort, but to protect the outer clothing  from sweat and the smelly body – remember, in the old days, few people bathed on a daily basis. Outerwear was also scratchy, so softer undergarments offered some respite.

Today’s outer garments are most commonly made with breathable fabrics – and we generally wash frequently – so the necessity of the singlet is not the same as it was forty years ago.

So why wear a singlet? Not just for warmth in cooler weather, they are comfy and great for layering. It also does still protect your clothing – and can be washed much more than outerwear.

Today’s singlet is so much more than an undergarment! And when worn as an undergarment, there are many options – the white cotton tank top under a man’s shirt is not the only choice. Other popular options are crew neck T-shirts, V-neck T’s, long sleeved T-s, and athletic undershirts. Some women’s singlets have inbuilt bras, or are fitted to provide a shape-wear style advantage.

Are you a guy who favours white Y-fronts, silky boxers, or Lycra trunks? Did you know your underwear of choice can actually affect your fertility? There are numerous urban myths relating to a guy’s underwear of choice, and its implications for the sex of any babies he fathers. One popular story, believed by many, is that wearing tight undies will result in a baby boy, whereas looser garments will give the happy couple a baby girl. If only it was that simple!

Scientists and researchers have debunked this myth – let’s face it, in certain cultures, every man would be wearing the tightest briefs possible to ensure a long line of sons – and sons there would be, if it in fact worked. We know this is simply not the case.

There is, however, some truth to the idea that the style of underwear worn can impact on a man’s overall fertility.

A man’s testicles hang outside the pelvis for a reason – and it can’t be denied that inside the pelvis would be a safer environment. But optimal temperature is imperative for sperm production – it must be lower than the core body temperature – and at warmer temperatures, sperm counts diminish. Some researchers have found evidence to suggest that tight underwear, which holds the testes close to the body, particularly in warm weather, can be detrimental to a man’s sperm count (and consequently, his fertility).

Low sperm count is the cause of infertility in half of couples who struggle to conceive.

The effects of overheating the testicles are, fortunately, temporary, lasting from three to eleven weeks.  Additionally, there is some suggestion by scientists that polyester underwear also reduces sperm production, as this fabric creates electrostatic friction.

Some people have pondered this quandary to the extreme. There is even one company who has patented cooling boxers with the specific purpose of cooling the scrotum: organic cotton shorts with an ergonomic gel cold pack to insert into the undies. Wearers are “strongly advised “not to wear them for more than an hour at a time.

So what is the answer? Ideally, when trying to conceive, wear loose, cotton underwear. It needn’t be boxers, necessarily; gentle support is still important, particularly when exercising or playing sports. The key is to wear undies that aren’t too tight or restrictive, but are comfortable and allow a little “hang”. At the same time, don’t sit in hot spas, saunas, or baths, and don’t wear those tight skinny jeans. And don’t wear underwear to bed.