Hose, Stockings, and a Century of Sheer Sexiness

There is nothing sexier than a woman slowly pulling up her stockings.  Those thin, leg-hugging garments make your legs look so soft and tanned.  But when did that all start? 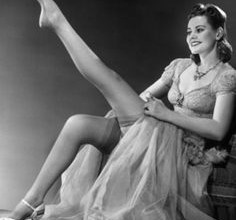 Back in the late 1500s, William Lee of Nottinghamshire invented the first knitting machine and made the first machine-made seamed hose.  At the time, men of good families wore stockings and garters under their doublets.  It was not for women until the Victorian era.  Stockings were made of wool or silk until a revolutionary yarn was invented in 1912:  the rayon fibre, also called artificial silk.  Then, in the 1930s, nylon was created for the first time.  It was such a popular material that stockings quickly became known as nylons.  “Strong as steel, as fine as spiders web”, declared its inventors Du Pont, as they showcased it at the New York World Fair in 1939. Nylons were an immediate success.  Women rushed out to buy them.  In Europe and in America, with the WWII restrictions, nylons could be had for a whopping $10 (a fortune in those days) on the black market.  While nylon is a strong fibre, it has no stretch, so manufacturers had to shape them and make stockings in many sizes so they would fit perfectly. In 1959, Du Pont (yes, them again) came up with a new, stretchy fibre called lycra.  Goodbye baggy ankles, say hello to comfortable hosiery that fits!  Say also goodbye to the seam as circular knitting became the norm.  This was perfect timing as, with the 1960s, hems went up and mini-skirts became popular.  Hose, or as is what now called pantyhose, became more visible.  This created a demand for fun, colourful hose, in a variety of patterns. Today, hosiery is enjoying a revival.  Its sex appeal makes it an essential item in your lingerie drawer.  At Undiewarehouse.com.au, we have the pleasure to offer over 200 different choices.  No matter which type you want, we have it.  We thrive to be your one-stop shop for the ultimate in high quality hosiery.

We offer the best names in the industry such as these Ambra in footless, no waist, body shapers, fishnets, ultra sheers, opaque and ladder resistant, control tights, and hipsters just to name a few.  We are proud to carry some amazing Razzamatazz pantyhose such as the curvaceous line in sheer and opaque.  We have a large collection of amazing stay-ups such as the Voodoo Killer Legs  that not only stay up but boasts a pretty lace border and a sensual aroma.

For an edgy and trendy look, why not try our leatherette leggings, available in blue or silver?  These full-length leggings only need a slinky top and some high heels for you to go out on the town. No matter the look you want, we’re sure to make you a very happy customer with our extensive lines of hosiery.